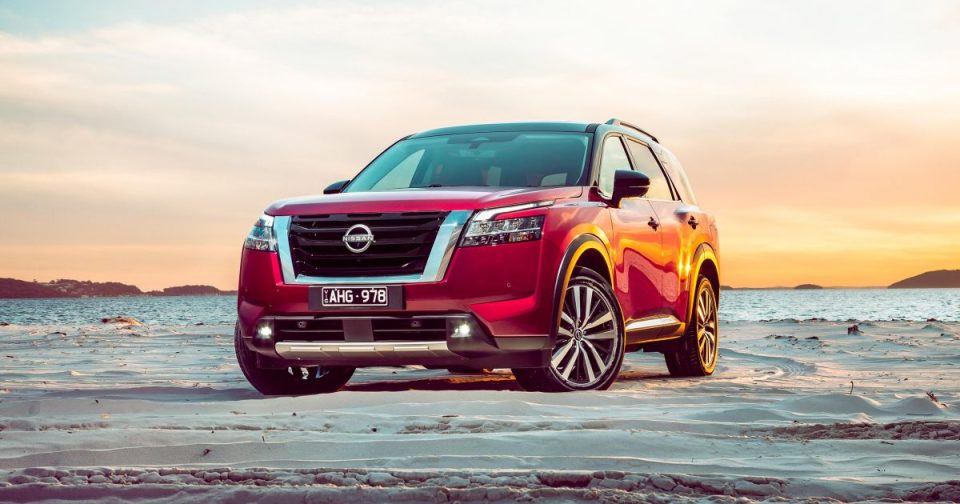 With a history that spans nearly four decades, it’s no surprise that inspiration for the latest 2023 Nissan Pathfinder can be traced back to the original boxy style version which first landed in Australia in 1987.

Back then it was two-door, body-on-frame SUV primarily designed for the United States market in answer to rivals makes and models like the Chevy Blazer, Ford Bronco, Jeep Cherokee, Toyota 4Runner and Isuzu MU.

Older Aussies will have fond memories of the facelifted second-gen version, especially the well-equipped Ti V6, which took pride of place in many driveways and mostly in gold paint which was overwhelmingly popular on high-spec variants.

However, the latest fifth-generation Pathfinder is a vastly different proposition to its rather frumpy-profiled predecessor. Boasting a bold, truck-like grille with a squared-off profile like the original model but now with a properly premium cabin incorporating high levels of safety and technology.

Of all its rivals the Pathfinder becomes one of the most masculine-looking SUVs in its class and should find plenty of favour for that aspect alone, never mind the exhaustive list of features and big space practicality that comes with it.

The new Pathfinder might be shorter than the previous version, but it’s also wider and higher, gaining plenty of clever space packaging, too. It’s an eight seater by default, but top-trim Ti-L buyers trade the second row split/fold bench for a pair of luxurious leather-upholstered captain’s chairs, instead – well worth considering if you have a slightly smaller tribe and can stretch the budget.

Even the rear doors open wider than they ever have, while parents and kids alike will welcome an ingenious one-touch button which automatically flips and folds the second row seating forward for easy access to the third row – adults included.

It’s been a long time coming. Nissan has been without a large crossover for around 18 months, with the new Pathfinder only now starting to lob into local showroom, despite having been on sale in the US since 2021. It’s not all new, though – the platform and V6 engine are developments of the the previous-gen model’s.

Even the outputs are identical, though Nissan has scrapped the CVT in favour of a fancy new nine-speed auto transmission with shift-by-wire technology for faster and smoother gearshifts, they tell us.

Nissan’s engineers have also fine-tuned the steering for a sharper response, while also reworking the suspension for improved levels of damping, increased roll stiffness and a wider contact patch to boot – all in the interests of better ride comfort and more confident handling.

The changes are more than welcome. This is a significantly more refined and more rewarding driving experience than the previous model offered.

Nevertheless, new Pathfinder has its work cut out for it given there’s only one V6 petrol engine available – meaning no diesel or popular hybrid options like equivalent models from carmakers such as Hyundai, Kia and Toyota.

How much does the Nissan Pathfinder cost?

Like everything else in market, pricing for the latest Nissan Pathfinder is up compared with its aged predecessor, opening at $54,190 before on-road costs – a sizeable increase of $9950.

What is the Nissan Pathfinder like on the inside?

If you’re looking for a more comfortable cabin that what the new Nissan Pathfinder Ti offers, you’ll likely have to include bonafide premium brands on your shopping list, such is the look and feel inside.

There’s some similarities to the latest-generation X-Trail in the same flat-bottom steering wheel and cool new shift-by-wire gear selector, both of which are nice and tactile and feel great to the touch.

The leather upholstered seats up front are sumptuous and thickly cushioned with contrast stitching, but so are those out back. And that’s not the only place you’ll find the softest leather. From armrests on all four doors to the centre console bin itself as well as the dash is wrapped in the stuff.

The tech is also first rate incorporating a huge 10.8-inch head-up display – especially good if you’re using the onboard satellite navigation that displays directional highlights in blue with extra-sharp clarity.

But while the nine-inch infotainment display is sufficiently large and well positioned for easy touchscreen access, it’s a step backwards to the 12.3-inch screen found in the smaller X-Trail. It’s no biggie but noticeable nonetheless.

It’s a similar story with driver’s display. While X-Trail Ti gets a super-size 12.3-inch all-digital version, the same grade in the Pathfinder makes do with traditional dials paired with a small 7.0-inch TFT display between analogue dials.

It’s only when you step up to the top-spec Ti-L do you match X-Trail’s fully-digital unit. Some might find that a bit odd given Pathfinder’s size and positioning within the range.

Another odd exclusion is are rain-sensing wipers – only available with the full-fat Ti-L, as are second-row captain’s chairs. Just don’t tell the kids would be my advice or you’ll likely be committed.

Still, wireless Apple CarPlay is bulletproof even in regional Victoria, with quick response and zero dropouts.

And where more than a few carmakers have chosen to ditch physical buttons and dials in favour of touchpads and haptic versions, Nissan has chosen the more sensible route leaving the air-con and audio/tuning dials for everyday convenience.

Mind, you still get enticements like heated rear seats, a 13-speaker Bose audio unit and rear window sunshades, as well as features like remote start (perfect for the Aussie summer given its kicks over the air-con system) and large wireless charging pad.

Where the Pathfinder really starts to shine are in the areas of practicality, space and storage solutions. For starters the rear doors open wider than ever before, while there are no less than 16 cupholders, 5 x USB-C and A charging ports, as well as air vents across all three rows and the easiest third-row access I’ve yet to experience in the segment.

It’s called the EZ Flex system, and with just one touch of a button on either outer second row seats and the seat slides forward and folds in one quick movement, making it a cinch for adults and kids alike to access third-row seating.

Once seated in row three, you’ll be surprised at the space back there, including legroom. It’s quite decent and capable of accommodating adults on shorter trips.

Obviously, if you choose the flagship Ti-L seven-seat variant, the two Captain’s chairs negate the need for any such system.

There’re more examples of versatility in the luggage department as both second and third row seats recline, fold dead flat and split 60/40.

Not only is there sufficient space behind the third row (205 litres) for a regular family grocery shop, luggage space grows to 782 litres with both seat rows folded. Additionally, there’s a secret luggage pod under the floor – plastic-lined and perfect for wetsuits or soiled clothing after a wet downhill MTB session.

What’s under the bonnet?

For 2023 there’s only one choice for the new Nissan Pathfinder; a naturally-aspirated 3.5-litre V6 engine producing 202kW of power at 6400rpm and 340Nm of torque at 4800rpm, identical outputs to its predecessor.

Thankfully the old CVT has been dumped in favour of a far more refined nine-speed torque-converter automatic transmission, with shift-by-wire for smoother and more decisive gearshifts. It’s available with both front-wheel drive and all-wheel drive depending on variant.

The new Pathfinder claims to use 10L/100km on the combined cycle in front-wheel drive guise and slightly more at 10.5L/100km in all-wheel drive models. It has a 71L fuel tank and uses 91 RON regular unleaded fuel.

Braked towing capacity is 2700kg and unbraked is 750kg, with maximum towball download of 270kg and maximum roof load of 74kg.

How does the Nissan Pathfinder drive?

First off, it’s a great driving position in the new Pathfinder, with the driver nestled deep into the vehicle, yet still with a commanding view all round thanks to slimmed-out pillars. It feels strangely European in that regard.

The 3.5-litre V6 might have been around for a while, but it’s quiet, smooth revving and pulls reasonably well under higher loads thanks to the new nine-speed auto.

It also gets off the line with a decent amount of urgency and a lot less commotion than I recall of its predecessor.

Motorway kays at the maximum legal speed limit are effortless and noise free in the Pathfinder’s higher gears, though it’s a shame Nissan doesn’t offer the same e-Power hybrid the latest X-Trail will get in 2023. Nevertheless, it’s still reasonably efficient and far more responsive across the rev range.

And like new X-Trail, Nissan has sharpened Pathfinder’s dynamic qualities with key upgrades to the suspension and steering.

Right from the get go you’ll notice the sharper, more responsive turn-in from its EPAS – the previous Pathfinder was rather soulless, this latest generation is fun to drive.

It’s the same story with ride and handling, which are both vastly improved thanks to increased roll stiffness (front and back), along with new shocks, dampers and lighter materials.

The doors are lightweight aluminium while there’s a 50 per cent increase in high-strength steel for less weight and increased rigidity.

It makes big difference, especially motoring along at a good clip in Victoria’s undulating terrain in these regional parts.

The secondary effect to these structural enhancements is a noticeably quieter ambience inside the cabin over pretty much any surface.

Moreover, Nissan has laid down more than twice the thickness of carpet backing on the floor, 20 per cent more isolation through the door panels, acoustic laminated front glass, along with redesigned dash and bonnet insulation.

The entire driving experience feels more polished and significantly more resolved that the previous Pathfinder – even off-road, across extended stretches of gravel roads undertaken on the launch program.

Honestly, gravel roads are effectively and completely cushioned in the new Pathfinder but with newfound stability and composure thanks in part to a wider footprint with 20 percent wider tyres.

What do you get?

Along with significant price rises, Nissan has understandably upped the standard equipment inventory for Pathfinder with an extensive list of goodies even for the ST entry model.

Pathfinder Ti and Ti-L are also available with the following two-tone options:

Is the Nissan Pathfinder safe?

The new 2023 Nissan Pathfinder was recently awarded a five-star ANCAP safety rating thanks to an extensive suite of active safety systems included.

How much does the Nissan Pathfinder cost to run?

CarExpert’s Take on the Nissan Pathfinder

Not only has the Pathfinder gone from ugly duckling to one of the toughest looking SUVs in its class, but the new-generation Nissan is a significant leap forward overall with loads of tech, space and safety systems on board.

While it makes do with the same smooth-revving V6 petrol engine as its predecessor, the addition of a new nine-speed auto transmission is akin to a game changer when it comes to refinement and driveability.

Then you add Pathfinder’s newfound roll stiffness, chassis rigidity, and general ride comfort, and you’ve got a well-accomplished SUV more than capable of taking the fight to its toughest rivals.