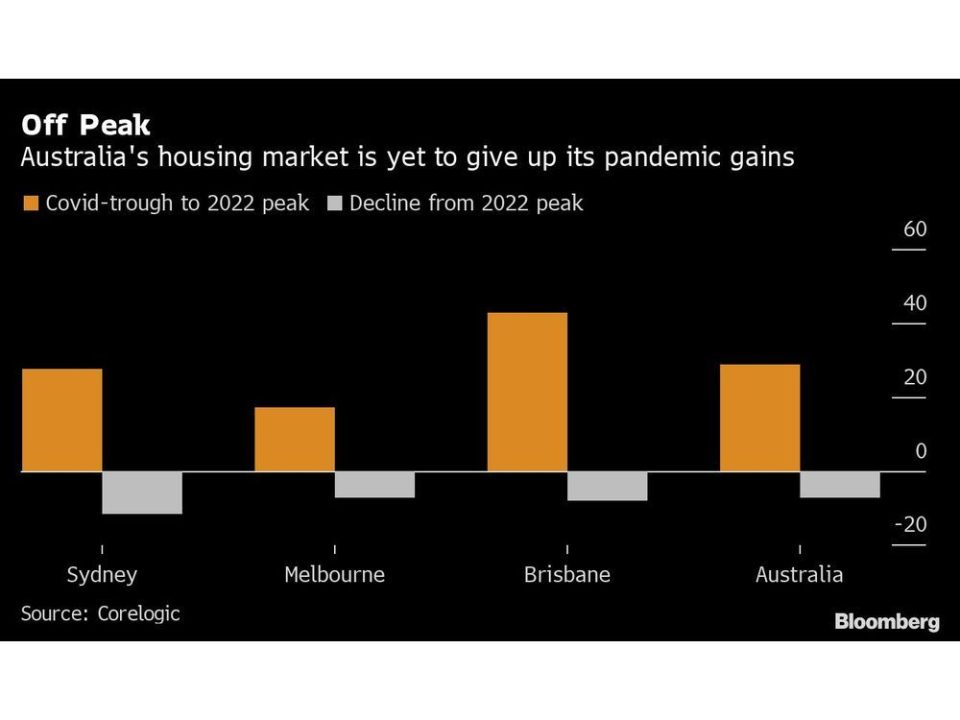 (Bloomberg) — Australia’s central bank raised its key interest rate for an eighth consecutive month and said it expects to tighten policy further as it seeks to cool the hottest inflation in three decades.

The Reserve Bank increased its cash rate by a quarter-percentage point to 3.1%, the highest level since November 2012, at its final meeting of 2022. Tuesday’s widely anticipated decision brings the RBA’s cumulative hikes since May to 3 percentage points, the sharpest annual tightening since 1989.

“The board expects to increase interest rates further over the period ahead, but it is not on a pre-set course,” RBA Governor Philip Lowe said in his post-meeting statement. “The size and timing of future interest rate increases will continue to be determined by the incoming data.”

The governor’s comment helped push the Aussie dollar to 67.36 US cents in Sydney, while three-year government bond yields climbed 7 basis points to 3.08%. Ahead of the meeting, investors had been pricing in a slight chance the RBA might pause rate increases.

Australia has been an early mover in slowing the pace of tightening as the central bank tries to safeguard economic growth while reining in inflation that’s forecast to touch 8% this quarter. It was the first developed economy to downshift to quarter-point hikes in October and has signaled a potential pause ahead to assess the impact of moves so far.

In contrast, central banks in Wellington and Washington have tightened by 4 percentage points and 3.75 percentage points respectively in their cycles and signaled a determination to slow consumer prices irrespective of the economic cost.

That explains why in Australia, money markets are pricing in a peak rate of around 3.6% by mid-2023, which is in line with economists’ estimates. New Zealand’s central bank late last month forecast a terminal rate of 5.5% next year and the Fed is also expected to keep tightening.

“Today’s statement was a bit more hawkish than probably expected by the market,” said Tapas Strickland, head of market economics at National Australia Bank Ltd. It “can be read as — if it comes to inflation and wages being inconsistent with getting back to target, the RBA is prepared to continue to hike even if that risks a greater slowing in activity.”

Today’s hike, if passed on in full by banks, will push mortgage rates to 5.08% from just 2.4% in April — an outcome that may create “sticker shock” for borrowers, said Eliza Owen, head of research for property consultancy CoreLogic Inc. “The higher rate environment will test housing market conditions in 2023.”

So far, the pace of home prices declines in Australia has been orderly amid weak supply and rapidly-rising immigration.

The governor reiterated today that inflation is “too high,” even though a monthly indicator last week showed headline prices eased in October to 6.9%, compared with a median estimate of 7.6%.

The rate increases are still to filter through the economy, with gross domestic product forecast to have surged 6.3% last quarter from a year earlier, though much of that reflects a low base effect due to virus lockdowns in 2021.

Still, underlying strength remains in the A$2.2 trillion ($1.5 trillion) economy, underpinned by large savings built up during the pandemic and low unemployment, even in the face of the rapid rate increases.

All that goes to explain why the RBA doesn’t see a recession Down Under, though its desire to engineer a soft landing has led to questions about the rate-setting board’s commitment to defeating inflation.

“While not our base case, there’s a risk the RBA’s December hike could be its last. We think the RBA’s expectation to hike further is unlikely to extend beyond a final 15-bp tightening in February as inflation pressures and demand cools, and conditions in the labor market ease.”

Lowe has acknowledged the path to cooling inflation while preserving employment gains is “narrow.”

Some economists reckon the RBA will have to do a lot more tightening than currently envisaged given the inflationary wave sweeping across the globe.

Treasurer Jim Chalmers said in a news conference after the decision that the government is trying to devise a program to ease the impact of surging energy prices on households and businesses. Those costs are among drivers of Australia’s elevated inflation.

—With assistance from Tomoko Sato.

Instagram Hacked? How To Navigate The Hijackers – Social Media