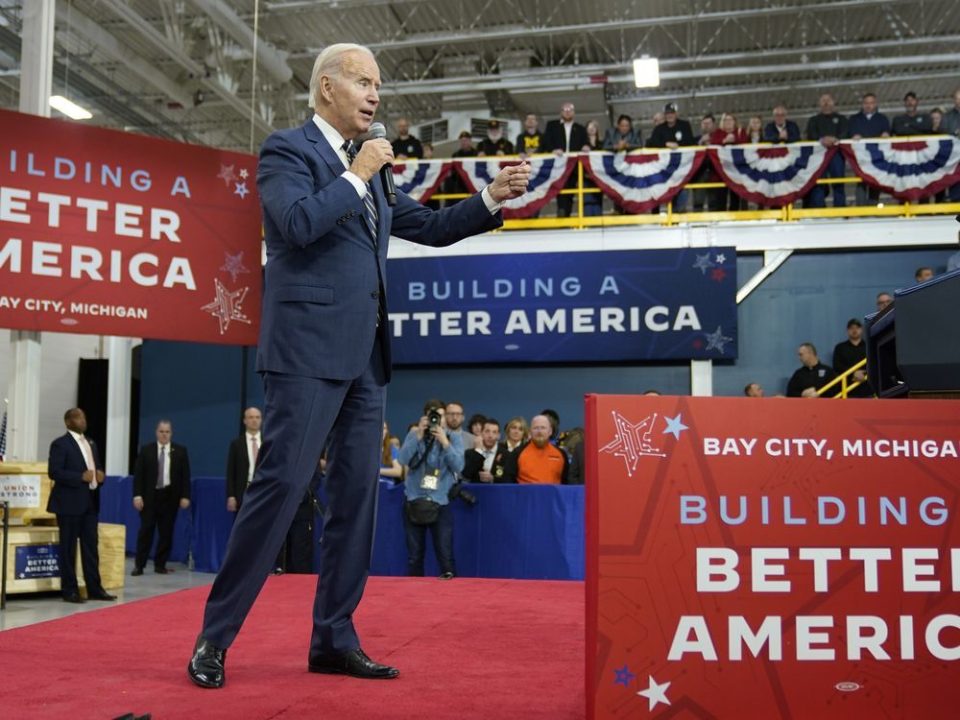 President Joe Biden on Tuesday plans to visit the building site for a new computer chip plant in Arizona, using it as a chance to emphasize how his policies are fostering job growth in what could be a challenge to the incoming Republican House majority.

Biden has staked his legacy in large part on major investments in technology and infrastructure that were approved by Congress along bipartisan lines. The Democratic president maintains that the factory jobs fostered by $52 billion in semiconductor investments and another $200 billion for scientific research will help to revive the U.S. middle class.

“This is actually about building an economic strategy that goes beyond semiconductors,” said Brian Deese, director of the White House National Economic Council. “This is a marked departure from the economic philosophy that has governed for much of the last 40 years in this country, which was a sort of trickle-down economic strategy.”

But there are signs that past moments of bipartisanship on economic matters may be harder to replicate after November’s midterm elections, in which Republicans won a House majority. Biden still pitches the investments as a sign of what happens when lawmakers partner with each other, but Republican House Leader Kevin McCarthy, who could be the next speaker, attacked the government investments as a “blank check” and “corporate welfare.”

Biden is visiting a plant under construction by the Taiwan Semiconductor Manufacturing Co. that was announced in 2020 during Donald Trump’s presidency. TSMC will also announce a second plant in Arizona on Tuesday. Biden administration officials said the two TSMC plants as well as new factories by Intel, Micron, Wolfspeed and others could give a decisive edge to the American military and economy at time when competition with China is heating up.

The White House has simultaneously launched a video campaign to highlight the array of non-tech jobs associated with the semiconductor industry. Biden has visited four other computer chip sites since September, with the highly paid factory jobs promising spillover hiring for construction, janitorial services and other businesses.

Featured in the video campaign is Paul Sarzoza, president and CEO of Verde Clean. Sarzoza founded the company in 2019. It won a contract to clean TSMC’s construction site, accounting for a third of its 150 jobs. Sarzoza’s company will clean the semiconductor plant, with workers wearing what’s known as a “bunny suit” to prevent any contamination from hair and skin.

The government’s investment was key for his company’s growth, and he expects to add 150 to 200 more employees next year.

“It’s one step at a time,” Sarzoza said. “But it’s a tremendous opportunity for us.”

Computer chip company Intel has also invested in Arizona, which has become a microcosm of the nation’s broader political divides. The state on Monday certified the results of this year’s elections, a process drawn out by many GOP officials who falsely claim the 2020 election, in which Biden beat Trump, was rigged.

Biden uses his visits to chip plants to talk about the jobs he expects will come to those regions, a process that could take a decade or longer to come to full fruition. Companies could face a challenge in finding educated workers for jobs with incomes averaging over $100,000 a year, according to Labor Department figures.

Ronnie Chatterji, White House coordinator for the chip investments, said these investments will shape entire regions of the country in ways that are overlooked now.

“Ten years from now we’ll be talking about all the jobs in Arizona,” Chatterji said in an interview. “You won’t be able to talk about that part of Arizona without thinking about the impact of those companies.”

But Biden might need to thread a needle and preserve a sense of bipartisanship for the long-term investments to succeed, said Keith Krach, a business executive who as an under secretary of state in the Trump administration helped bring TSMC to Arizona.

He said the investments will rival NASA’s Apollo Program, which didn’t just land men on the moon but also made the U.S. a leader in micro electronics, software, computers and aerospace.

Krach said that preserving political unity is key and the way to do that is for political leaders to stress how the chip plants can keep the U.S. ahead of China.

“It’s unifying,” Krach said, because Chinese President Xi Jinping “is terrified of the United States having a Sputnik moment, which I think this really represents, and declaring a moonshot.”