Dispute resolution involves a series of decisions: Which lawyer
does the party engage? Which barrister? In which forum should the
claim be brought? Which witnesses should be called? And so the list
goes on. Whilst managing a dispute is very different from the
decision to build a new factory, or enter a new market, ultimately
entering into a dispute (or deciding whether to defend one’s
position) involves a number of strategic and tactical choices and
is essentially an investment decision: how much time, money and
effort am I prepared to invest to seek redress?

Whilst disputes are fundamentally a series of investment
decisions, the logic behind those decisions is often cloaked in and
clouded by ego and emotion.

In addition to the ego and emotion of the parties to the
dispute, it is important to remember that solicitors, barristers
and other professionals can also bring their egos and emotions into
the process. Even when ego and emotion are kept in check – and
despite all the talk of “early case assessment”- rarely
is a robust framework used to help structure these decisions and
communicate changes over time.

Decision trees are one tool that can provide such a framework
and structure.

What is a decision tree?

Decision trees are easy to follow, easily understood flow-chart
like diagrams which set out a visual, logical representation of the
possible outcomes of a series of related issues and decisions.
Their use as a decision-making tool in planning strategy makes them
ideal for use in dispute resolution.

The first step in managing a dispute process is the
identification of the key issues driving the final outcome,
normally in terms of quantum. A great deal of value can be obtained
from this process alone: lawyers and clients need to have a
realistic assessment of the amount of money at stake at an early
stage of the process. Once each decision point and every potential
outcome has been identified and recorded, the likelihood and value
of each different event need to be estimated.

Our experience is that legal teams and their clients are often
sceptical, or at least nervous, of putting percentage chances
against different potential outcomes. However, they do –
perhaps subconsciously – tend to put things into one of five
different categories; Highly likely, Likely, 50/50, Unlikely and
Highly unlikely. These categories can be translated into chances
expressed as percentages.

Most lawyers would hesitate to say that anything in a dispute is
certain – a witness may have a bad day in the witness box,
new case law may emerge, or the judge or arbitrator may make an
error of law. So even something that is deemed ‘highly
likely’ should probably only have an 85%-90% chance applied to
it. Conversely, even something that is deemed “highly
unlikely’ is rarely considered as having absolutely no chance
of occurring, so perhaps can be considered a, say, 10% chance.
Then, consider the “50/50” and this third category is the
middle of the five categories. The two remaining categories of
“likely” and “unlikely” sit between the middle
ground and each end of the assessment spectrum, and applicable
percentages may be considered to be say 70% and 25%
respectively. 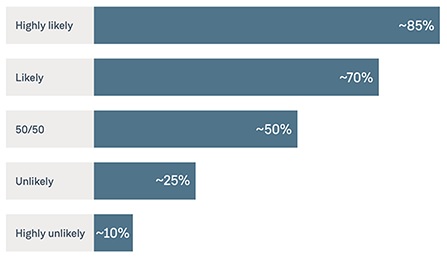 In terms of the estimated values attributable to each potential
outcome, consideration should be made of the costs or gains
associated with each event, including delays, taxation, and court
interest where appropriate.

Once all alternatives have been considered, documented, and
outcomes calculated (being likelihood x value), based on the
information available, the client and its advisors can determine
which course of action at any particular outcome point will yield
the most preferable result. In some cases, the ultimate decision
may not be driven by the final outcome on damages, but on what will
occur in relation to costs based on the duration of the
process.

Decision tree analysis, and in particularly the associated
documentation and thinking behind that analysis, can also help the
legal team to identify and mitigate risks, as it allows them
to:

Especially in the early stages of a matter, it may not be clear
which scenario (or set of scenarios) is most likely. Whilst
discount rates can often deal with estimation risks in considering
potential cash flows, there are some situations where binary
inflection points may need other approaches.

For example, it is common for non-compete clauses to have
cascading alternative periods – 24 months, or if not then 18
months, or if not then 12 months etc. Each of these can be seen as
a different scenario which should be modelled separately, rather
than modelling, say, the longest (or shortest) period and then
trying to use the discount rate to account for the likelihood of
being successful for each time period. Depending on the
circumstances of the case, the legal team may have a view that one
or other of these scenarios has a greater likelihood of being
found.

It is important to understand how the likely outcome from a
matter is sensitive to changes in a key input. Modelling of changes
in each assumed input can allow the legal team to understand which
inputs are likely to have the greatest impact on the outcome.
Repeating a decision tree to test the veracity or impact of a minor
change to each assumption will identify key inflexion points on
which a matter may hang. If, for example, a movement of 5% in
probability causes a significant change to the ultimate outcome,
attention needs to be paid to that variable to understand and
refine it as much as possible. Again, this may include further
investment, for example, on discovery, or seeking the opinion of
another expert or counsel.

Similar to how they support sensitivity analysis, decision trees
help to identify and show the relationships between different
elements – legal questions, evidentiary facts and assumptions
from factual witnesses and expert opinions. They can help to
document the extent to which those have an impact on a likely
outcome, thereby better informing the decision of where investment
will derive greatest “bang for buck”.

Stakeholders in a dispute will view the different elements and
associated risks in different, sometimes conflicting ways: the view
of the party providing capital may differ from that of the party
seeking justice, and again from that of an expert. Decision trees
allow for the identification and articulation of differing opinions
or assumptions within and between the client team and its
professional advisors, allowing them to be dealt with and agreed
upon before the matter is too far progressed. Is the difference
between two opinions down to the question asked, or something else,
like an assumption? If it seems to be a function of which question
to ask, investment might be made in requesting senior counsel to
assess its legality and/or working with a consulting expert. If it
appears to relate to an assumption, investment might be made in
assessing the merits of that assumption, which might require
further evidence from witnesses of fact, or more investigations by
an expert.

Decision trees provide a formal structure which facilitates
communication within a team and to other stakeholders as to why a
particular course of action is considered appropriate at a
particular point in time. To a large extent, people are visual
creatures and decision tree diagrams cut through the clutter of
words, clearly laying out paths, options, likelihood, and
outcomes.

The reality is that – with very limited exceptions – disputes
are run only once in any jurisdiction, and usually only in one
jurisdiction. It is essential that the legal team and clients are
clear on the range of values that may arise from the various
scenarios, and in particular ensure that the client can afford the
uppermost limit of that range. A decision tree is a form of
probability adjusted cash flow analysis, which can be repeated over
the course of a dispute. As things change, determinations are made,
or other information comes to light, the framework provided by a
decision tree can be revisited and updated to assess the impact of
a change from an investment return, and decision path
perspective.

As courts increasingly turn their mind to whether legal costs
are proportionate in the circumstances , decision trees demonstrate
how such costs were assessed.

If there is a challenge as to proportionality, a clearly laid
out decision tree can provide a defensible, formal assessment to
justify why a particular course of action was determined to be
proportionate at a point in time.

If there is no assessment of the likelihood of particular
scenarios and the values of those scenarios, then it is difficult
to see how lawyers can demonstrate why particular aspects of costs
were, at the time, considered proportionate.

Section 24 of the Civil Procedure Act 2010 obliges those to whom
the overarching obligations apply, to use reasonable endeavours to
ensure that legal costs and other costs incurred in connection with
the civil proceeding are reasonable and proportionate to the
complexity or importance of the issues and amount in dispute.

Section 24 imposes a continuing obligation. Parties and the
lawyers must regularly examine during the course of a proceeding
whether they have used ‘reasonable endeavours’ to assess if
there is a proportionate relationship between the costs and the
value in dispute (McCarthy v Camil Holdings Pty Ltd [2016] VSCA 235
at [57]-[60]; Actrol Parts Pty Ltd v Coppi [2015] VSC 758 at
[61]).

Decision tree analysis does not replace robust legal analysis
and advice, however it is one of a number of tools that can be used
to ensure that pro-active and comprehensive risk assessment and
project management techniques are brought to bear on the dispute
process.

Decision trees, and the thinking behind them, provide a
structure, framework, and communication tool within disputes to
help assess the merits of each decision. They can also help to
identify, and possibly reduce or eliminate, the extent to which
emotion and ego may be playing a part.

Decision trees – and perhaps just as importantly, the systematic
thinking required to populate them – can help those involved
clearly show the proportionality of tactical and strategic
decisions made throughout the process, and effectively communicate
reasons for changes in approach throughout the dispute.

New Restriction On The Termination Of Contracts Between The State And Foreign Investors – Will The Number Of Arbitrations Decline? – Arbitration & Dispute Resolution

Malaysia aims to add US flights after safety rating boost