In a recent case, the Hon’ble Delhi High Court vide its
order in the case Tanul Thakur v. Union of
India1 , has directed the Committee constituted
by MeitY (Ministry of Electronics and Information Technology) under
the Blocking Rules, 2009 to give a post-decisional hearing to the
Petitioner for corrective measures and to provide a copy of the
original blocking order to the website’s owner.

Democracy and censorship are theoretically incompatible
concepts. Censorship in democracy defeats the mere idea/ notion of
democracy. Democracy entails certain important freedoms, with one
of the most important and revered ones being the right to freedom
of expression. Censorship in any form (whether arguably justified
or unjustified) certainly steps on the toes of the idea of
democracy, and as such, any move made by democratically elected
governments to impose censorship is met with much scrutiny and
distrust.

In India, while Article 19(1)(a) of the
Constitution solemnizes this invaluable freedom in perpetuity, the
same is tempered by Article 19(2) of the
Constitution, which subjects such fundamental rights to
“reasonable restrictions”, namely “in the
interests of the sovereignty and integrity of India, the security
of the State, friendly relations with foreign States, public order,
decency or morality or in relation to contempt of court, defamation
or incitement to an offence“. In this regard,
restrictions borne out of “public order, decency or
morality” are perhaps the most susceptible to misuse by the
Government.

In this background, it is apt to discuss India’s IT
(Blocking Rules), 2009, under which, inter alia, the
Ministry of Electronics and Information Technology
(MeitY) has the power to block websites as well. In this
regard, one of the more controversial provisions of the Rules is
Rule 16, under which MeitY can claim confidentiality while blocking
websites. This issue boiled over recently in May 2022, when the
Hon’ble Delhi Court passed an order in the saga regarding the
blocking of the website www.dowrycalculator.com/

The Petitioner in the case had alleged that his satirical
website namely “Dowry Calculator” was blocked by the
Respondents (MeitY) without following the prescribed procedure, as
no notice was issued or hearing was taken before blocking the
Petitioner’s impugned website.

The aggrieved party, one Mr. Tanul Thakur, a
film critic and journalist, had created a website www.dowrycalculator.com/ (domain being
registered in 2011), satirical in nature. A
screenshot of the said website is copied below: 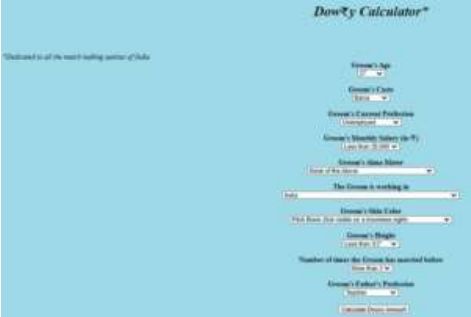 In this website, one could select options from the above
drop-downs to get an amount of “dowry” they are eligible
for. The contents of the website were clearly satirical. Even
before the lawsuit came into the picture, there were however public
complaints from personalities such as Mr. Jyotiraditya Scindia (a
member of the ruling political party BJP) and Mrs. Maneka Gandhi (a
prominent activist), who had purportedly written to the Government
and sought action against the website and its creator. However, the
creator nevertheless persisted with the satirical website and the
website was operational up until 2019, when it came to notice that
the website was blocked by the DOT (Department of Telecom).

Due to this, the Internet Freedom Foundation (IFF), a digital
liberties organization purportedly filed an RTI (Right To
Information) application, seeking a reason/ justification for the
blocking of the website.3 Eventually, the petitioner,
Mr. Thakur, being so aggrieved by the actions of the DOT/ MeitY,
filed a writ petition W.P.(C) 13037/2019 before the Hon’ble
Delhi High Court.

Court’s observation and direction in the case

While the case is still ongoing, the Hon’ble Delhi High
Court recently vide its order dated March 21, 2022, directed the
government to share the order on the basis of which the subject
website has been blocked, and also directed that the Petitioner be
afforded a hearing, as per the provisions of the Information
Technology (Procedure and safeguards for blocking of access of
information by public) Rules, 2009.

While the order may prima facie seem insignificant, insofar as
the fact that the case is still going on is concerned, its
importance stems from the fact that this is seemingly the first
time that the government has been directed by the judiciary to
provide information in such cases. This counts as a check and
balance to unfettered exercise of the IT (Blocking
Rules), 2009, signifying that, at the least, an
opportunity to be heard has to be provided to the owner/creator by
the MeitY before blocking any website.

After all, if satire can be curbed, then the sky is the limit
for censorship. It would thus be interesting to see how this saga
unfolds.

Supreme Court will hear challenge to key section of the Voting Rights...