Energy systems around the world, including Australia, are
undergoing a transformation in the way that electricity is
generated and consumed. Traditionally, energy has been produced by
large, centralised generators (such as hydro, coal and gas) and
transported to consumers through transmission and distribution
networks, as illustrated in Figure 1. Electricity flowed in one
direction, and there were few resources to coordinate for the
Australian Energy Market Operator (AEMO).

However, Distributed Energy Resources (DER) are shifting
the way our electricity systems operate and the role of
AEMO in coordinating resources. DER are small-scale resources that
can use, generate or store energy at homes or businesses. The most
common example is rooftop solar but can also include electric
vehicles (EVs), at-home batteries and even smart appliances such as
schedulable air conditioning. Energy systems are changing from
being centred around large-scale generators to one where thousands
of energy resources line the rooftops of modern Australian homes
and businesses, as shown in Figure 2. 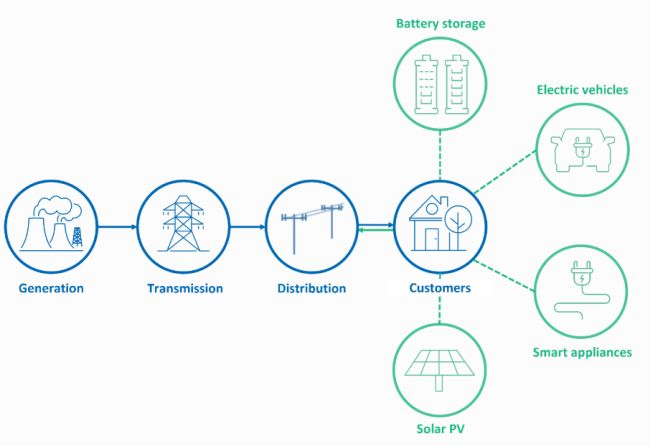 DER has the potential to make energy systems greener, cheaper,
and more reliable. If not managed properly, added uncertainty could
disrupt reliability and create difficulty in keeping the lights on.
In this way, DER is like an orchestra – if everyone plays
their instrument at random, the sound is awful. However, when
played together, harmony is created. Therefore, a key aspect to
understand when considering the impact that increasing DER will
have on energy systems is whether resources are active or
passive:


If the flexibility of active DER can be coordinated, it has the
potential to support the energy transition by facilitating access
to a broader pool of renewable energy, helping to ensure the
reliability of the power system, and reducing prices for consumers.
However, a lack of coordination of active DER could cause
instability within the power system and leave Australia with more
hurdles to overcome on the path to net zero.

For DER to enhance our energy systems, centralised systems need to be in place to
coordinate and control resources on behalf of the asset
owners, essentially ensuring that it operates as a single entity.
This is often referred to as a ‘virtual power plant’ (VPP),
where lots of energy resources operate as one.

One benefit of this is that DER can reduce the need for
emissions-intensive dispatchable generators, such as coal and gas
power stations. For example, if there is a shortfall of electricity
at a point in time, one household battery won’t move the dial.
However, if 10,000 batteries can simultaneously provide energy to
the grid, it acts in the same way as a large dispatchable
generator.

This is similarly true when there is low demand during the day.
If demand for electricity from the grid is too low, a VPP operator
can increase demand from the grid by charging batteries. During
times of very low demand, the coordinated battery fleet can do the
job of balancing supply and demand in real-time in response to a
system disturbance.

Further, coordinating DER can overcome the challenge of managing
electricity demand during peak times. If EVs are set up with the
appropriate technology, the software can optimise the charging of
vehicles in a way that benefits the power system. For example, an
owner may plug in their vehicle when they return home from work and
instruct a software that they need a minimum charge of 30%
immediately (in case of an emergency trip) but don’t need the
vehicle to be fully charged until 6 am the following morning. The
software would be able to meet these needs by providing an initial
charge, but then delaying the remainder until after peak evening
demand has subsided.

For widespread centralisation of DER to become a reality, asset
owners need to be included in the journey by sharing the benefits
of a coordinated system. This starts with customers understanding
and unlocking the advantages of synchronised energy resources.
There are projects all over Australia that are currently embarking
on this journey. One example is Project Symphony in Western Australia,
which aims to combine rooftop solar, battery storage and major
appliances such as air conditioning into a single VPP to provide
energy market and network support services to the benefit of
electricity consumers.

Given the role that VPPs, and DER more broadly, can provide in
making Australia’s power systems more reliable, it is critical
that policies are put in place to ensure they emerge as a
commercially viable and technically efficient solution. To this
effect, work is being done to ensure policies and standards are
created for DER integration. As part of their
post-2025 DER implementation roadmap, the Energy Security Board
(ESB) is driving industry coordination to standardise communication
between devices, establish frameworks to enable DER to interact
with the market and respond to operational signals, and explore how
benefits can be fairly shared between consumers.

POPULAR ARTICLES ON: Energy and Natural Resources from Australia

Suzuki Jimny electric and hybrid due before 2030

Japan, Netherlands to join US in restricting chip equipment exports to China-Bloomberg