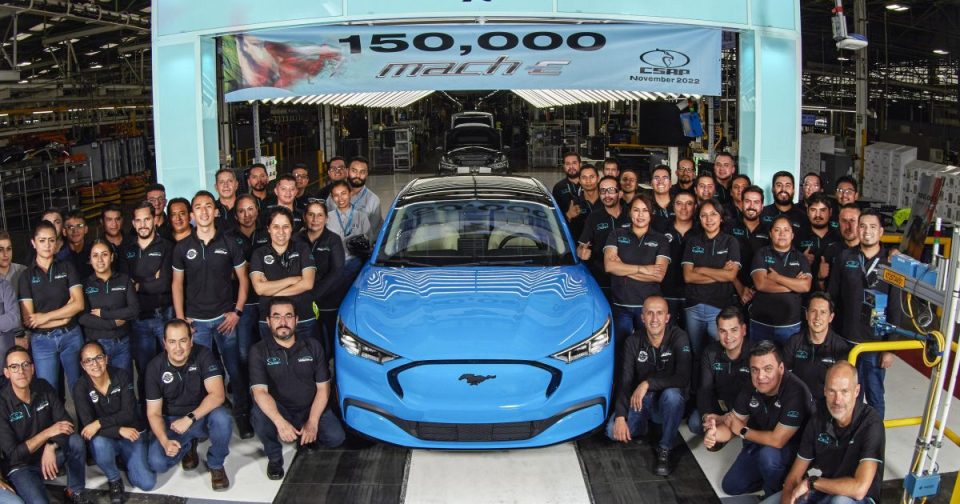 Ford has produced its 150,000th Mustang Mach-E electric SUV after almost two years – as the battery-powered crossover rolls out across more markets.

The 150,000th Mustang Mach-E was produced at the Blue Oval’s Cuautitlán stamping and assembly plant in Mexico, which recently received some upgrades to support more production.

Ford also produces the Mustang Mach-E in China as part of a joint venture with Changan Ford for the Chinese market.

The Mustang Mach-E will be available in a total of 37 countries in 2023, including new confirmed markets such as New Zealand, Brazil and Argentina.

Missing from this list is Australia, which isn’t yet officially confirmed by Ford to receive the Mustang Mach-E. But as recently reported, CarExpert understands the Mustang Mach-E will be one of the previously announced five electrified Fords due here by 2024.

It will likely follow the Escape plug-in hybrid (PHEV) which launched this year, and the electric E-Transit and E-Transit Custom vans, due in 2023 and 2024, respectively.

Ford Australia has previously said the electric SUV’s chances for a local launch were dampened not by the lack of demand, but by lack of supply.

It’s unclear what variants will make the trip to Australia, but in the UK it’s offered in RWD, AWD and GT guise.

The RWD and AWD models are offered with a choice of 75.7kWh (Standard Range) and 98.7kWh (Extended Range) batteries, with the GT only offering the larger of the two.

Standard Range RWD models produce 198kW of power and 430Nm of torque, with a range of 439km on the WLTP test cycle. Opting for the Extended Range bumps power and range to 216kW and 610km, respectively.

Standard Range AWD models produce 198kW and 580Nm, with a range of 399km. With the Extended Range battery, power is bumped to 258kW and range to 539km.

Maximum DC charge power is 115kW on models with the smaller battery and 150kW on those with the larger battery.

The introduction of the Mustang Mach-E would give Ford a rival to not only the Tesla Model Y, but also the Hyundai Ioniq 5 and Kia EV6 and upcoming Subaru Solterra and Toyota bZ4x.