The Department of Patents, Designs and Trademarks (DPDT), under
the Ministry of Industries, Bangladesh, is a government body that
is responsible for granting patents, designs and trademarks
registrations in Bangladesh.

Bangladesh has recently brought amendments to its IP regime and
has also suffered the consequences of Covid-19, socially as well as
economically, like the rest of the world. We have previously
gathered and analyzed the statistical data provided by DPDT,
Bangladesh for the years 2004 to 2014 which can be accessed here. Now, we have gathered the statistical
data provided by the DPDT, Bangladesh for the past 12 years, from
the year 2010 to 2022, to study the changes observed in
applications and registrations of patents, designs and
trademarks.

In 2015, the Bangladesh government brought two changes to its
trademark laws. Firstly, it enacted the Trademark Rules, 2015 that
repealed the old Trademark Rules, 1963 and secondly, it brought
amendments to its Trademark Act, 2009. The new rules have allowed
the trademark applications to be filed in Bangla language as well.
This step certainly helps encourage the residents and locals to
file trademark applications independently. 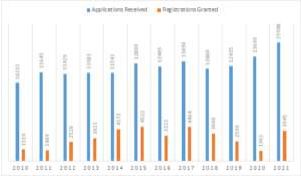 In terms of trademark filing, there have been ups and downs in
the past decade. However, the number of applications have increased
by more than 50 per cent since 2010. Furthermore, the trademark
applications have gradually increased by 10 to 13 per cent since
2019. Even the onset of Covid-19 does not seem to have any effect
on the number of trademark filings received in the year 2020 and
2021. 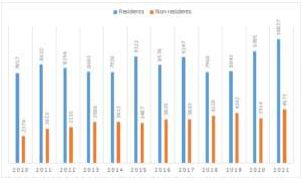 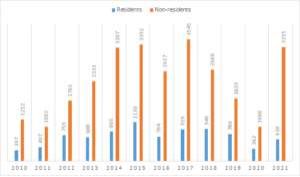 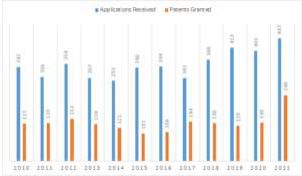 In terms of patents granted, the number has doubled from 137 in
2010 to 240 in 2021, marking the year as one in which the highest
number of patents were granted by DPDT, Bangladesh till date. 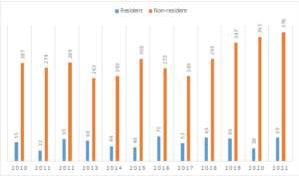 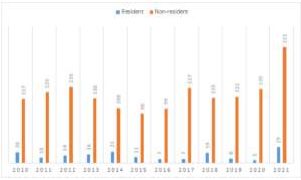 The DPDT, Bangladesh has only released statistical data till the
year 2020 and is yet to publish figures for the year 2021.
Therefore, we have analyzed the data from the year 2010 to 2020
only. 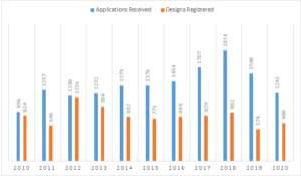 In terms of designs registered, the numbers peaked in the year
2012 to 1156 registrations. However, the overall trend has suffered
a decline from 824 registrations in 2010 to 688 registrations in
2020. Furthermore, the gap between the applications filed and
registrations granted is minimal in the years 2010 and 2012. Since
2012, this gap has been consistently increasing till 2019 with a
slight relief in the year 2020. 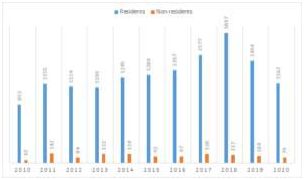 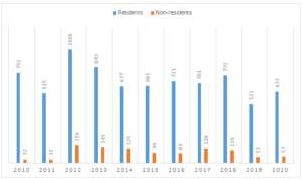 The Government of Bangladesh has made several changes in its IP
legal regime. The IP Policy 2018 brought by the Bangladesh
government with a mission to make Intellectual Property an
essential part of the national development plans and strategy has
seen positive changes in the area of trademark and patent filings
in terms of domestic applications. However, no such change has been
observed in case of industrial design applications.

The government has also decided to repeal its old Patents and
Designs Act, 1911 and replace it with Bangladesh Patent Act, 2022
for patents and another act for industrial designs for which a
draft of Bangladesh Industrial Design Bill, 2021 has already been
approved by the cabinet. These steps are taken to diversify and
bifurcate the two areas.

The government has recognized the important role of Intellectual
Property rights in the development of economic status of a country
and is taking active steps to develop its IP laws and bolster the
same. The Bangladesh IP regime has undergone major changes in its
IP regime and its effects will surely be reflected in the next
decade.