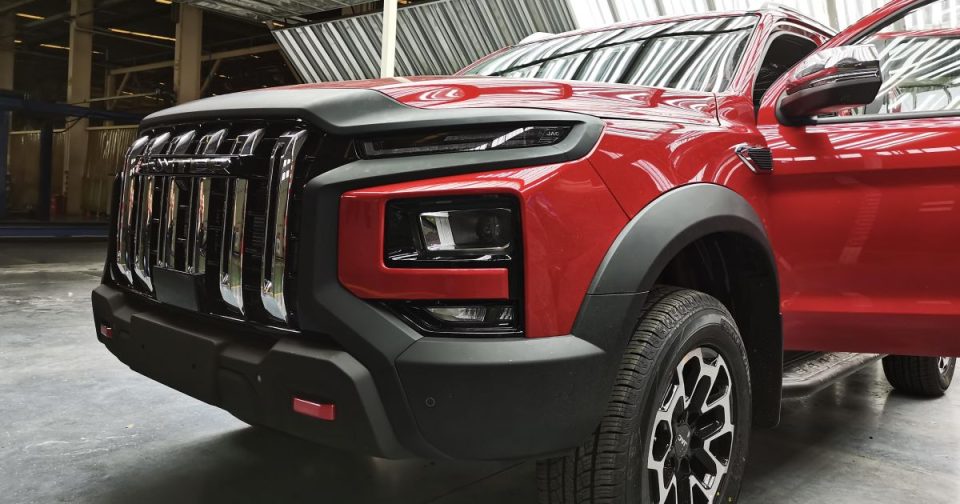 The turbo-diesel T9 is due to launch locally in June 2023 and will be followed by an EV variant expected in the second quarter of 2024. Australia and New Zealand will be the first export markets for the China-only JSC T9.

BLK Auto managing director Jason Pecotic said the T9 would be priced similarly to other Chinese-made utes such as the GWM Ute Cannon and LDV T60, which kick off below $40,000.

The turbo-diesel-powered JAC T9 will use a 2.0-litre four-cylinder turbo-diesel engine producing 125kW of power and 410Nm of torque.

This is mated to an eight-speed ZF automatic transmission with drive sent through a part-time four-wheel drive system. It’s expected to have a 3500kg braked towing capacity.

Official details about the all-electric T9 are yet to be confirmed, but it will presumably compete head-to-head with the LDV eT60 which is currently priced from $92,990 before on-road costs.

“Australia’s best-selling vehicles overall are the Toyota HiLux and the Ford Ranger – pickup trucks are incredibly popular at the moment,” said Mr Pecotic.

“This segment is huge, it’s about 180,000 units per year. But many buyers face a long wait to buy a pickup, so we expect the JAC T9 to be an extremely attractive alternative at a more affordable price point.”

BLK Auto is currently seeking to work with new dealer partners and its existing dealer network to distribute the T9 across Australia.

“The JAC pickup range will complement the existing electric truck offering from JAC and provide and our dealer network with a new option to market,” said Mr Pecotic.

“By the end of 2023 we will be importing three models of JAC electric trucks, and the two JAC pickup models will significantly add to the product range and help us grow our dealer network by giving our dealers more products to sell.”

Pricing and standard specification for the JAC T9 dual-cab ute will be detailed closer to its launch in June 2023.

JAC Motors is based in China’s Anhui Province and also produces a range of sedans, SUVs and trucks of various sizes – including electric ones.

Its Australian distributor BLK Auto has offices in NSW and Queensland and sells buses, JAC’s electric trucks, as well as a hydrogen fuel-cell coach bus.

BLK Auto says has had JAC’s N55 electric truck in trials in Australia for the last two years and is aiming “to leverage the launch of the pickups to establish a comprehensive dealer network”, it adds.

Cheap workhorses that have come and gone include the JMC Vigus and ZX Auto Grand Tiger, but perhaps the best-known is the Foton Tunland.

Is Political Ideology Now A Leading Cause Of Divorce? – Divorce