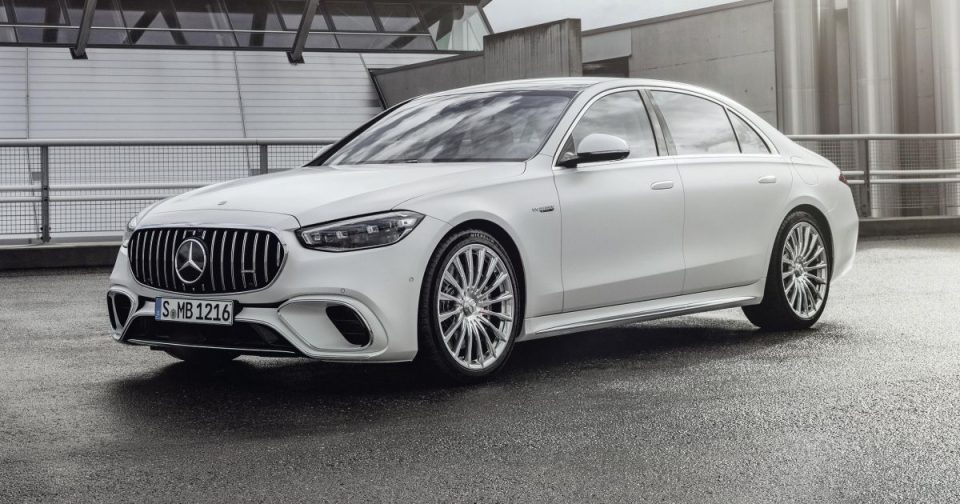 Mercedes-AMG has just revealed the most powerful S-Class of all time in the form of the S63 E Performance plug-in hybrid (PHEV), but it won’t be coming Down Under.

A Mercedes-Benz Australia spokesperson said the S63 E Performance won’t be offered locally because the previous model wasn’t a big seller in the Australian market.

If you’re set on a PHEV AMG, the smaller electrified four-cylinder C63 S E Performance is coming to Australia around the middle of 2023 in sedan form.

The Mercedes-AMG S63 E Performance is powered by an updated version of the twin-turbo V8 PHEV powertrain that’s used in the GT63 S E Performance – which will go on sale in Australia from 2023.

There’s also a larger 13.1kWh lithium-ion battery pack located above the rear axle which allows for a claimed pure electric range of 33km according to WLTP testing.

Mercedes-AMG says the high-voltage battery has been designed for fast power delivery and discharge, not for the longest possible range.

Total system outputs in the S63 E Performance are a staggering 590kW of power and 1430Nm of torque, which is 30kW less and 30Nm more than the GT63 S E Performance.

Mercedes-AMG claims the S63 E Performance can do the 0-100km/h sprint in 3.3 seconds and flat out you’ll be doing 290km/h with the optional AMG Driver’s Package. That’s not bad for a 2.6-tonne luxury high-performance sedan.

The twin-turbo V8 engine in the S63 E Performance is mated to a nine-speed automatic transmission, with the electric motor integrated with a two-speed transmission and an electronic limited-slip rear differential.

Although the e-motor is mounted on the rear axle it’s mechanically linked to the car’s all-wheel drive system, so it can shuffle torque between the front and rear axles as required allowing electric AWD.

Recharging the S63 E Performance’s battery pack can be done via a Type 2 charging port at a maximum AC charging speed of 3.7kW.

The S63 E Performance is the first S-Class model to come with active engine mounts which “resolve[s] the conflict between soft connection of the powertrain for high comfort and hard connection for optimal driving dynamics”.

The car also gets an aluminium stabiliser under the V8 engine and a cross-brace at the front suspension mounting points.

At the rear there are lightweight aluminium diagonal struts and a load compartment made of lightweight fibre-reinforced plastic (FRP) which houses the battery pack.

The S63 E Performance receives AMG Ride Control+ air suspension as standard which at speeds above 120km/h lowers the car by 10mm, plus adaptive damping.

Providing the stopping power in the S63 E Performance are a set of AMG high-performance composite brakes with six-piston front calipers and one-piston rear calipers as standard. The brake discs measure 400mm at the front and 380mm at the rear.

The S63 E Performance offers four levels of regenerative braking, which at its strongest is able to feed over 90kW back into the battery.

On the outside, the S63 E Performance can be distinguished by the AMG radiator grille with vertical louvres and large central star. There are also 21-inch forged alloy wheels, trapezoidal twin exhausts and a rear diffuser.

Inside there are four seats, a standard AMG Performance steering wheel with AMG steering wheel buttons, as well as exclusive colours and various Nappa leather upholsteries with an embossed AMG emblem in the front headrests.

The MBUX infotainment system includes both AMG- and hybrid-specific displays and functions in the portrait touchscreen, digital instrument cluster, and head-up display.

Just like every S-Class, the S63 E Performance comes standard with a bucket-load of safety equipment.

Customers in Germany will also eventually be able to order the S63 E Performance with Mercedes-Benz’s LiDAR-based Drive Pilot Level 3 autonomous system, which was approved for use on German roads late last year.

Dollar holds firm on hawkish Fed bets, Aussie on back foot before RBA