On August 26, 2022, biotechnology company Moderna filed
lawsuits against pharmaceutical giant Pfizer and its German partner
BioNTech for the alleged infringement of patented mRNA technology
in the development of the “Comirnaty” COVID-19
vaccine.

The lawsuits, deposited in the U.S. District Court for the
District of Massachusetts (United States) and the Regional Court of
Düsseldorf (Germany), claim that the creators of the joint
Pfizer-BioNTech vaccine made unauthorized use of patents filed by
Moderna over the period 2010-2016.

“We are filing these lawsuits to protect the innovative
mRNA technology platform that we pioneered, invested billions of
dollars in creating, and patented during the decade preceding the
COVID-19 pandemic,” stated Moderna’s Chief Executive
Officer Stéphane Bancel in a press release.

Though Intellectual Property (IP) disputes are not uncommon in
the pharmaceutical industry, the scale and prominence of this
litigation are of rare magnitude.

What is mRNA technology?

At the heart of the IP dispute are immunological techniques that
utilize mRNA – short for “messenger ribonucleic acid.”
Unlike DNA, which has a familiar double-helical arrangement, RNA
encodes genetic information in a single, looped strand and is the
primary structure in virus genomes. As its name implies, mRNA is
used in more complex cells to relay genetic information,
specifically, during protein synthesis. In essence, the mRNA
molecule acts as a short-lived “burn after reading” data
packet that is first transcribed from DNA, transferred within the
cell, read, translated to produce the corresponding protein and
then degraded.

Synthetic-mRNA vaccines exploit this mechanism to cause the
patient’s body to produce viral spike proteins. Despite being
neither a virus nor dangerous, these identifying spike proteins
­­- called antigens – trigger the body’s normal immune
response and are destroyed. Subsequently, the immune system retains
a memory of the encountered antigen and is able to recognize and
respond to it more quickly in the event of an actual viral
infection.

Not all vaccines for COVID-19 rely on mRNA processes. For
instance, the Oxford-AstraZeneca COVID-19 vaccine uses the older
and more pervasive method of delivering antigens by way of a
modified virus. In this approach, a weakened or “dead”
virus is injected into the patient in order to stimulate an immune
response – the antigens being present in the dose. In an mRNA
vaccination, the body is fooled into producing the required
antigens itself by artificial “blueprints.” Both methods
have been proven to be highly effective. 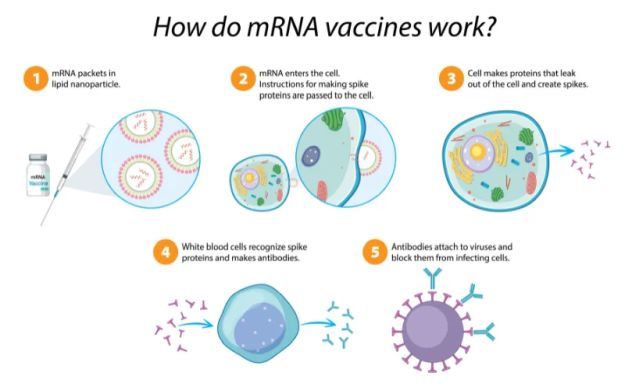 Prior to the expedited approval of the first COVID-19 vaccines
by national regulators in late 2020, no
pharmaceutical product based on mRNA technology had seen public
deployment. Curiously, the Pfizer-BioNTech and Moderna vaccines were granted emergency
authorization by the U.S. Food and Drug Agency just one week of
each other in December 2020.

In October 2020, Moderna announced a voluntary moratorium on enforcing its patent
rights pertaining to COVID-19 vaccines globally. This was done to
encourage the creation and distribution of vital medications at a
time of global emergency. Later, in light of the reduced severity
of the pandemic and the widespread availability of various vaccines
to high-income nations, Moderna reversed this policy in those
less-deprived countries. From March 2022, all IP rights were
declared fully enforceable except in 92 low- and middle-income
countries, referred to as advance market commitment (AMC)
territories.

Moderna Chief Legal Officer Shannon Thyme Klinger:
“Outside of AMC 92 countries, where vaccine supply is no
longer a barrier to access, Moderna expects Pfizer and BioNTech to
compensate Moderna for Comirnaty’s ongoing use of Moderna’s
patented technologies.”

As such, the unspecified damages sought from Pfizer and BioNTech
are to be calculated only from March of this year. Nevertheless,
these figures would still be substantial, considering Pfizer
projected its 2022 revenue to be approximately $32 billion USD from Comirnaty alone.
Similarly, relative newcomer BioNTech saw its annual profits skyrocket from ?15.2 million in
2020 to ?10.3 billion one year later.

In its own statement, BioNTech upheld the independence and
uniqueness of its research and of the Comirnaty vaccine.
“BioNTech’s work is original, and we will vigorously
defend against all allegations of patent infringement. BioNTech
also values and respects valid and enforceable intellectual
property rights of others and remains confident in its intellectual
property.” The firm went on to express dismay at
Moderna’s action: “It is an unfortunate but rather
regular occurrence that other companies make allegations that a
successful product potentially infringes their intellectual
property rights.”

Both BioNTech and Pfizer have declined to comment on their legal
strategies.

The purpose of the patent regimes in pharmaceutical research is
to secure sufficient compensation to recoup extremely high
development costs and fund additional projects. As such,
Moderna’s time- and country-specific waiver of IP rights is
just one possible approach to the dilemma of ensuring adequate drug
accessibility in a crisis. However, the role of exclusivity rights
in the fight against counterfeit medications should
not be overlooked.

Dennemeyer’s legal experts in the United States,
Germany and worldwide will follow these cases closely and continue
to provide their professional insight as the matter
progresses.

A Nation Without ‘Pillars’: Nigeria’s Rejection Of The OECD’s Two-Pillar Solution –...

The New Echo Dot Can Also Be a Wi-Fi Extender