In the case discussed below, the European Patent Office
considers the validity of a patent which is granted on the basis of
information which is only published after the patent is
filed. Plausibility and information supplied after
the filing of a patent application or during an opposition against
a patent is critically important in establishing patentability of
an invention.

The following sketch schematically illustrates the interplay
between inventive step, scope of the claims, disclosure and
supplemental data provided after the filing date of a patent
application. 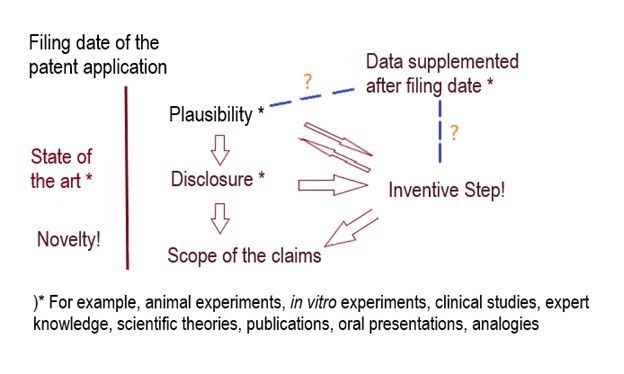 In a recent decision, T 0116/18 of October 11, 2021, see EPO – T 0116/18 of 11.10.2021, a Technical
Board of Appeal of the European Patent Office (EPO) referred three
questions concerning plausibility founded on evidence supplemented
to the office after the filing date (also called post-published
evidence) to the Enlarged Board of Appeal (EBA). The EBA is an
instance at the EPO helping to establish general and uniform
standards on the interpretation of the European Patent Convention
and for the practice of the Examiners at the EPO, often being
implemented in the EPO Guidelines for Examination of patent
applications.

The Board in the referring decision, T0116/18, discussed the
fact that the jurisdiction of the Technical Boards of Appeal and
the practice of the Examiners showed three different approaches
concerning the consideration of post-published evidence. It
therefore decided to involve the EBA.

The questions furnished to the EBA are the following:

For the acknowledgement of inventive step a patent proprietor or
applicant relies on a technical effect and has submitted evidence,
such as experimental data, to prove such an effect. If this
evidence was not public before the filing date of the patent in
suit (post-published evidence):


The questions are quite significant. The underlying question is
whether the grant of a patent is justified if the information in a
patent application does not show that the patentee really was in
possession of the claimed invention at the date of filing of the
patent.

This alludes to a principle that the extent of monopoly
conferred by a patent should correspond to, and be justified by,
the actual technical contribution to the art. It is debatable
whether a patent is deserved for a patent application which has to
rely on later filed supplemental data to obtain the effect claimed.
An example would be the filing of a patent application disclosing a
protocol for a clinical study without concrete results where the
data resulting from the study are provided during patent
examination as post-published evidence.

The Case leading to the referral by the Board in T 0116/18 was
one where a synergy for a combination of insecticides was only
supported by a late filed document (filed in an opposition against
a granted patent). The factual case is quite complicated – if
interested, please see the link above for details.

The case does not deal with enablement (synergism was no feature
of the claims) but with the inventive step of the claimed invention
which depended on the plausibility of the (technical effect)
synergy based on the late filed evidence as proof.

During the assessment of inventive step, it turned out that
questions needed to be referred to the Enlarged Board of Appeal on
whether evidence not public before the filing date of the patent in
suit and filed after that date (“post-published
evidence”) can be taken into consideration in view of the
plausibility case law of the Boards of Appeal.

The referring Board of Appeal, discussing many decisions from
case law, identified three lines of previous case law on the
admissibility of post-published evidence:


With regard to these two lines of case law, the referring Board
(at the end of 13.5.4) concluded that “in this board’s
view at least, it is a fundamental question of law whether the ab
initio plausibility or ab initio implausibility standard is to be
applied”.

The Board then goes on to identify a third line of case law:

3.”No plausibility” standard – this line of case
law is described “to reject the concept of plausibility
altogether” (13.6 of the referral). This standard is based on
the assumption that it cannot be expected from an applicant to
include an extensive amount of experimental evidence corresponding
to all technical features that could fall under a broad claim. The
referring Board, under 13.6.2, cited T 2371/13 which states:
“It is usual to invoke a technical effect for inventive step
which is not explicitly mentioned in the application as filed. …
A lack of plausibility of an effect based on the absence of
evidence in the patent application is not a sufficient reason to
disregard tests filed later to prove that effect.” This line
thus states the lowest necessity of plausibility in the originally
filed patent application.

“The three lines of case law discussed above contain
two extreme positions, one being a strict application of the ab
initio plausibility standard and the other one applying the no
plausibility standard. These two extremes illustrate that different
results are obtained depending on which plausibility standard is
applied. On the one hand, by applying the ab initio plausibility
standard strictly, the ultimate result would be that patent
applicants receive a patent only for embodiments for which
experimental data or other substantiation is contained in the
application as filed that makes the effect invoked for inventive
step plausible for these embodiments. Hence, any extension of the
claimed scope over what has been experimentally shown or otherwise
substantiated in the application as filed would lead to refusal of
the application. If, on the other hand, no plausibility standard
were applied at all, a patent applicant could claim whatever it
thinks might possibly be proven later to bring about a purported
technical effect. This would give rise to what is often referred to
in the case law as “speculative patenting” or
“armchair inventions” where a monopoly is conferred to a
patent applicant for mere speculation rather than a true invention.
The ab initio implausibility standard in terms of its results
appears to lie somewhere between these two extreme lines of case
law.


… On the other hand, requiring plausibility or at least the
absence of implausibility to access post-published evidence can be
particularly problematic in cases where an effect needs to be
established vis-à-vis a prior-art document that has not
been, and perhaps could not have been, considered by the patent
proprietor/applicant. … This would mean a basically
insurmountable hurdle for patentability once an opponent invokes a
new closest prior-art document in opposition proceedings.
Furthermore, such an approach would go against decades of case law
which has allowed the reformulation of the technical problem in
view of new closest prior-art documents and the reliance on
post-published evidence in support of the newly formulated
problem.”

Under 13.7.3, the Board also notices an additional tension
between the ab initio plausibility and ab initio
implausibility standards on the one hand and the principle of free
evaluation of evidence on the other hand: “It is not
immediately clear what could be the legal basis for preventing the
patent proprietor from relying on a particular type of evidence of
a fact relevant to the outcome of the proceedings. Likewise, it is
not clear on what basis a board would be prohibited from taking
into account evidence it finds convincing and decisive.”

In 13.7.4, the referring Board even expresses doubts whether
Inventive Step is a proper legal basis for plausibility.

In summary, it is thus clear that this decision by the Enlarged
Board of Appeal might have considerable impact on the drafting and
prosecution of patent applications at the European Patent Office
and deals with quite fundamental issues to patenting. To what
extent the Enlarged Board of Appeal will provide guidance on the
issue of plausibility in establishing inventive step, and to what
extent it accepts its role and assesses uniform application of the
law in that regard, will have to be seen. The issue has an impact
on the burden of proof in the case of opposition proceedings:
“Under the ab initio plausibility line of case law to
which the second referral question refers, it is the patent
proprietor that has to prove plausibility while in the ab
initio implausibility line of case law, to which the third
referral question refers, it is the opponent that has to show
implausibility” (14. of the referral).

We can, of course, provide advice on how to establish a solid
basis for a patent application by data and theoretical and
practical knowledge and can support you by drafting and prosecuting
patent applications and defend or enforce patents with a good
chance of success, considering and providing advice with regard to
the potential issues in view of the plausibility issue, based on
experience and an appropriate amount of intuition.

Pedestrian left in serious condition after being struck by vehicle in Cambridge – Boston News, Weather, Sports