The Board upheld a refusal to register the proposed mark
#LAW for legal referral services, finding that the
term, as used on Applicant Pound Law’s specimens of use, fails
to function as a source indicator. Instead, the Board found that
the term, a vanity phone number, would be perceived by consumers as
merely informational, a means to contact the applicant or its
licensee, the Morgan & Morgan law firm. In re Pound Law, LLC, 2022 USPQ2d
1062 (TTAB 2022) [precedential] (Opinion by Judge Cynthia C.
Lynch). 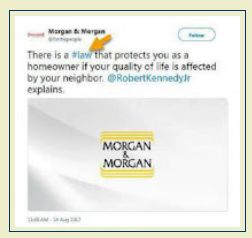 The Board observed that, as made clear by the Trademark Act, the
USPTO “is statutorily constrained to register matter on the
Principal Register if and only if it functions as a mark.”
In re Brunetti, 2022 USPQ3d 764, at *9. Section 45 defines
“trademark” and “service mark” as “any
word, name, symbol, or device, or any combination thereof … used
by a person … to identify and distinguish” goods or
services, respectively, “and to indicate the source” of
the goods or services, “even if that source is unknown.”
The Board must determine “whether the relevant public, i.e.
purchasers or potential purchasers of the identified legal and
legal referral services, would perceive #LAW as identifying the
source or origin of such services.” See,
e.g., In re Texas With Love, LLC, 2020 USPQ2d
11290, at *2 (TTAB 2020).

Considering first the nature of the proposed mark, the Board
pointed out that “matter widely used to convey informational
messages generally is not perceived as indicating a single
source.” See, for example, Vox Populi
Registry, 2022 USPQ2d 115, at *3 (affirming
failure-to-function refusal where .SUCKS would be viewed “as
only a non-source identifying part of a domain name, rather than as
a mark”). The CAFC in Vox Populi indicated that
evidence of how a term is used in the marketplace is relevant to
the issue of consumer perception.

Citing numerous examples from various law firm advertising
materials, the Board found that #LAW is commonly used as a hashtag
in the legal field, including by the applicant’s licensee,
Morgan & Morgan. Although the third-party uses are not in the
nature of trademarks, they are probative of consumer perception.
“Applicant’s use of its proposed mark is not qualitatively
different than the third-party uses that Applicant concedes are not
source indicating.”

Applicant Pound argued that the Board has long recognized the
registrability of mnemonic telephone numbers, pointing to TMEP
Section 1209.02(l). [Reminder: the TMEP is not the law -
ed.]. The Board, however, pointed out that the new
versions of vanity phone numbers “present a somewhat different
situation that traditional alphanumeric numbers.” The
different “formation” of these new vanity numbers
“impacts perception and distinguishes them” from
traditional numbers.

Turning to the applicant’s own use of #LAW, its specimens of
use fell into two categories: multimedia examples promoting the
Morgan & Morgan law firm, and website excerpts promoting the
#LAW vanity phone number to the general public and to law firms. As
to the former, the Board concluded that they do not show service
mark use because “they present #LAW as a mnemonic for the
telephone number #529, by which prospective clients may contact a
lawyer at Morgan & Morgan law firm, not as a source indicator
for legal or legal referral services.”

As to applicant’s website specimens (which do not refer to
Morgan & Morgan), the Board found that, when each is viewed as
a whole, consumers would view #LAW as a mnemonic for a phone number
and not a source indicator. For example, the appearance of #LAW
under #529 on a cellphone screen conveys that “this is the
phone number to use to be connected with a lawyer who is part of of
the ‘nationwide network of law firms.'” 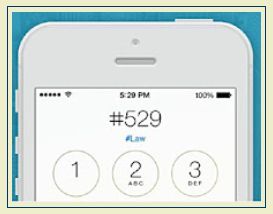 Applicant Pound maintained that the Board disregarded the
CAFC’s Dial-A-Mattress decision, which Pound claimed
“expressly recognize[s]that mnemonic telephone numbers
function as trademarks.” The Board disagreed. “Just as
there is no per se rule that all mnemonic telephone numbers are not
registrable, there is no per se rule that they are. As in all
refusals, consumer perception is determined based on the unique
evidence and circumstances in each case.”

Dial-A-Mattress involved the reversal of a genericness
refusal of 1-800-MATTRESS, deeming the mark descriptive but having
acquired distinctiveness. Here, the refusal is based on
“failure-to-function in view of the manner of use by Applicant
on its specimens.” Thus, there is no inconsistency between
this case and Dial-A-Mattress.

Finally, Pound pointed to its ownership of a 15-year old
registration for #LAW on the Supplemental Register. The Board was
unimpressed, observing that it must make its own findings of fact
regardless of the conclusions made by an examining attorney in
another application, and recognizing that circumstances have
changed in the 15 years since the prior registration issued
(including third-party use of the proposed mark as a hashtag).
“Given the nature of Applicant’s use on the specimens at
issue, the prior registration does not convince us that #LAW
functions as a service mark in the case before us.”

The Board therefore affirmed the refusal to register under
Section 1, 2, 3, and 45 of the Trademark Act.

Product Liability In The Era Of New And Emerging Technology: Changes On The Horizon – New Technology