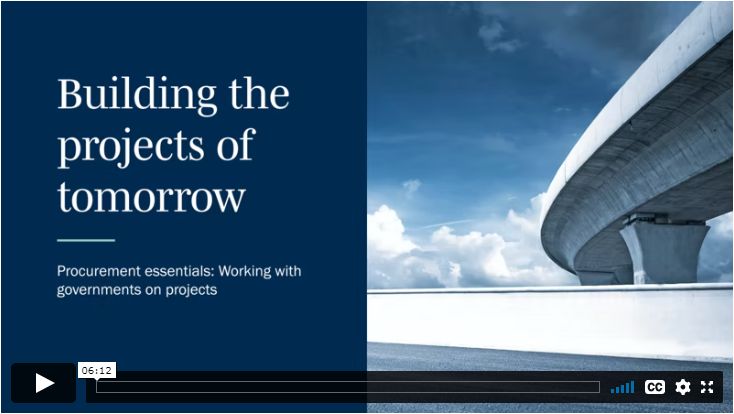 Working with government authorities follows a particular set of
procedures and practices. In this video, Tom Yeo and Phil Symmonds discuss what private-sector
proponents should do to navigate the process.


Click here to see other videos in this
series.

Thomas Yeo (00:07): Thanks for taking a few
minutes to join us today to talk about government involvement in
large projects and transactions. I’m Tom Yeo, Corporate Partner
at Torys, and I frequently act for governments at all levels:
federal, provincial, municipal, as well as Crown corporations on a
wide variety of corporate commercial matters including procurement.
And joining me today is my partner, Phil Symmonds, who co-heads
Torys’ Procurement Group with me.

Phil Symmonds (00:32): Hi there. I’m Phil
Symmonds. I’m a Partner in the Corporate Group at Torys.
I’ve spent most of my career in transactions with a significant
government component to them, including financing, M&A, a
variety of transactions in the energy and infrastructure space, as
well as procurement.

Thomas Yeo (00:50): So, Phil, when we talk
about government involvement in projects and transactions,
there’s obviously many different forms that can take. Can you
take a minute to talk about those different forms of
involvement?

Phil Symmonds (01:01): Yes. Well, governments
can be involved in a variety of different ways. Funding, as in
funding from various funds. Financing, as in the emergency lending
program that we saw during the pandemic. Seller, as in
privatization transactions or electricity de-control transactions.
Contract counterparty, as in the credit-worthy counterparty that
might underpin an infrastructure transaction as regulator,
obviously. And lastly, as procurement authority. So, Tom, you work
with government authorities a lot. What are some of the things that
private sector proponents should be cognizant of when dealing with
the government?

Thomas Yeo (01:39): Well, working with
government is obviously different than working with private sector
partners. A government may have a variety of different objectives
with a particular project or transaction. It could be a social need
or objective, economic development, national defence, or meeting a
government’s own administrative need. And in most cases, a
project will represent a combination of these objectives. For
example, more and more governments are looking to make sure
projects that may have a particular primary objective are also
being used to advance other social objectives, such as Indigenous
reconciliation and green procurement. It’s important for
private sector proponents to understand those objectives. Usually,
they’ll be very apparent from the outset of the project and the
government will be upfront about them, but don’t lose sight of
them as the transaction proceeds because those are the factors that
will inform the government decision making along the way. In that
decision making, governments will have all sorts of different
pressures and constituents to consider. You need to be patient with
that and appreciate that they have a mandate to look at everything
from a public interest lens. And you can’t necessarily look at
the government as a single point of contact. “Who is the
government?” Is a critical question on every project or
transaction. There’s the political side and the public service.
You often have multiple ministries involved, all with different
mandates and objectives, and you may have other Crown corporations
or different levels of government involved in different capacities
in a transaction. Don’t assume that they’re all speaking
with one voice and all have the same interests or mandates. And so,
Phil, with that backdrop, where can private sector partners add
value to the process?

Phil Symmonds (03:26): Well, Tom, I might start
with a couple of don’ts. Don’t focus on improving the
government. Don’t see the exercise as one of making the
governments more like the private sector. Clients often have a
project or a concept in mind, and they come to the government with
a communications solution wrapped around it. Communications are
critical, but governments rarely need the private sector to provide
a communications solution. Governments are very, very good at
communications. Private sector proponents do, however, have a deep
knowledge of markets and often bringing an element of private
sector project management is helpful. Governments often work very
well within ministries, but not as well across multiple agencies,
bringing organizations, scheduling, organizing meetings to brief up
issues, making sure effective decisions are being made—all of
that can be extremely helpful. And Tom, do you have any tips for
dealing with government decision-making?

Thomas Yeo (04:26): Well, in all honesty, the
decision-making process can be somewhat slow and bureaucratic in
government, but it’s all part of the accountability framework
that’s been put in place to protect the public interest and
protect the public purse strings. So you have to be patient with it
and realistic about government timing. Often governments don’t
move at the same pace as in a private sector deal. That’s not
because they’re not working hard—in our experience, the
people working in government on transactions are extraordinarily
hard working—but it’s a function of the many controls and
checks and balances that are in place within the government
framework. And you also have to be aware that a crisis on another
file can arise at any moment, and your project can go from mission
critical, to down the priority list, and then back up to mission
critical in a matter of hours or days. And I’d say, finally, be
respectful of the internal processes of government. You generally
won’t have direct access to the responsible minister or the
minister’s staff, but the people in government you’re
dealing with know how to manage that process. The way you can help
them is by arming them with the information they need for
briefings, rather than getting directly involved in that
process.

Phil Symmonds (05:41): So I would sum that up,
Tom, by saying let’s recognize the differences, be respectful
of those differences, bring the private sector perspective and
skill set to bear, and all of that will significantly enhance your
prospects for success. So thanks to everyone for joining us today.
To learn more about our projects practice, you can go to
www.torys.com. Thank you.

Expensive, But So Worth It – Review Geek

AMBER Alert issued for mother, 6-month-old believed to have been abducted in...

No One Is Sadder Than Belgium’s Romelu Lukaku

Biden says can ‘tweak’ Inflation Act to include European countries