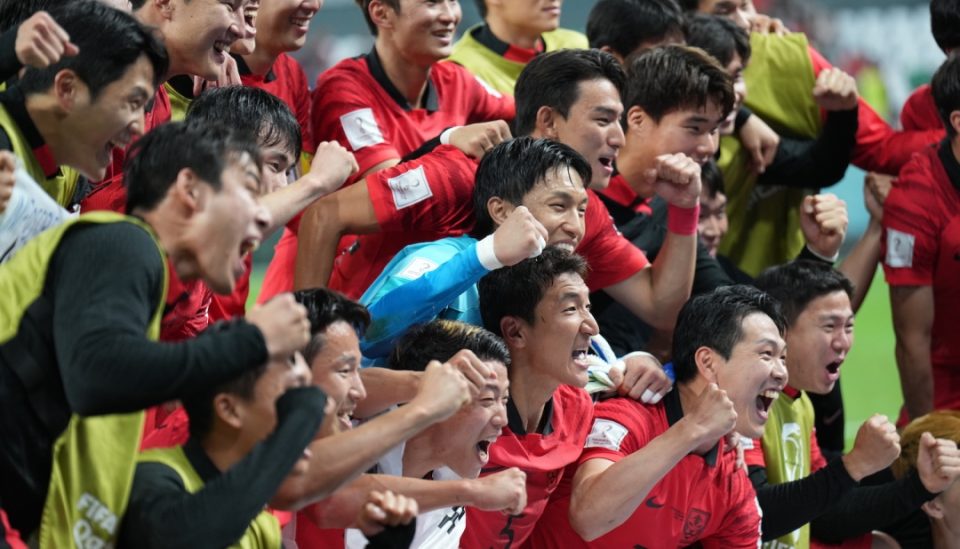 How many 85th minutes have you seen dawn on your team as they scrap, with mounting desperation and fatigue, for a miraculous, life-saving goal? How many times have you urged on the impossible, knowing the clock is steadily bleeding out while every half-chance on goal could be the final one of the game? And how many times has that goal failed to materialize? How many times has your heart been broken? Probably a lot, probably almost every time, because goals are rare little moments of impossibility and almost every attack from even the best teams in the world ends in a turnover. But that is the substrate of futility that makes the miracles that do occur that much more special; on Friday against Portugal, South Korea achieved such a miracle.

After holding onto the ball too long on three straight counterattacking opportunities, Son Heung-min (it had to be him) received the ball just inside his own half only seconds after the game crested into stoppage time. Son drove forward into a thicket of white shirts, and at first, his task seemed an impossible one. As a full 70 percent of the Portuguese team converged on him, Son stepped back with the ball for half a beat, just long enough for Hwang Hee-chan to sprint into a few feet of space and for Diogo Dalot’s legs to unzip so Son could thread the perfect pass to his teammate. Hwang, who was minutes into his first appearance at the World Cup, smoked it, then flexed to his fans. The Korean commentary is appropriately euphoric.

Here is the conventional angle with English commentary.

In order to advance, Korea needed a pair of interlocking results to go their way. As they came into the final matchday on a single point, thanks to a stifling draw against Uruguay and an outrageous 3-2 loss to Ghana, they needed to defeat group leaders Portugal to have any chance of advancing. The other game then had to either end in a narrow Uruguay win or a draw, though the latter path also required Korea to make up a goals-scored deficit to Ghana. They had a narrow window to squeeze through, and at first, it seemed they were doomed within the first 20 minutes of Group H action. Portuguese forward Ricardo Horta scored an alarmingly straightforward goal in the fifth minute after a nice move down Korea’s left flank. That was bad for Korea, though within their power to rectify, unlike the unfortunate development in the other game. Twelve minutes later, Uruguayan keeper Sergio Rochet flew at Mohammad Kudus in the box and forked over a penalty to Ghana. The day began with Korea on the outside, and it seemed it would end with them heading home.

But everything changed when Andre Ayew stepped to the spot. He slapped a poor, easily saved penalty at Rochet, and Uruguay scored the game’s first goal five minutes later. Korea, meanwhile, responded to Portugal’s goal by increasing their tempo and more aggressively pressuring Portugal. The Portuguese side stopped pushing as hard as they were before their goal, and waves of Korean aggression culminated in a 27th-minute equalizer minutes after Uruguay’s go-ahead goal. Uruguay scored again, and even though both games seemed ready fully lurch into weird, intense goalfests like Group E, things stayed knotted for a very long time. A Korea goal would push them through; a Uruguay goal would force Korea to score two. Nothing happened for almost an hour.

Korea started to seem desperate. They continued pouring forth at the Portuguese goal, forcing several big saves on strong attacks, but after failing to break through, they started visibly flagging around the 80th minute. Son over-dribbled, midfielders struggled to keep the tempo high, and the Korean fans surrounding me at the bar looked like they wanted to be obliterated by a train. They were feeling the sustained dread of knowing that their team needed a Moment, a Moment that was unlikely to emerge, and whose failure to do so would mean that it would be another four years until their team (if they were lucky, that is) would even have the opportunity to play their way into a scenario requiring another Moment . It was an awful feeling, one that every soccer fan knows.

How spectacular it was the Korea nailed the winner, and knocked out Uruguay in the process. There’s no better feeling than witnessing all that futile non-scoring pay off in a miracle winner. Even sweeter, it was a multi-layer revenge winner. There are a ton of little historical mini-rivalries threaded throughout this group of four teams from four federations. Uruguay knocked South Korea out the last time they made it through the group stage, in 2010, before going on to defeat Ghana on Luis Suarez’s infamous goal-line handball. Naturally, Ghanaian fans celebrated Uruguay’s demise even though they lost. Uruguay also knocked out Portugal in 2018. During Korea’s incredible semifinal run in 2002, they escaped from the group on a 70th minute winner scored by Park Ji-sung against Portugal.

This moment belongs to the fans, of course, but most of all, it belongs to Son. The group’s best player made the group’s best play. He’s tried and failed to bring his team out of a World Cup group twice, and minutes before his latest attempt ended in another heartbreak, he engineered the moment of brilliance that saw his team through. He had face surgery like a month ago, and he pulled the greatest hero moment of the World Cup so far, and for that, he should be celebrated forever.

This Is A Funny Way Of Saying That A.J. Brown Got His Old GM Fired