To print this article, all you need is to be registered or login on Mondaq.com.

September 2022 – In August, the Turkish
Competition Board (the “Board“)
published 48 reasoned decisions, but did not approve any merger
control filings.

The highlight of Turkish competition law in August is that the
Board initiated four new full-fledged investigations. 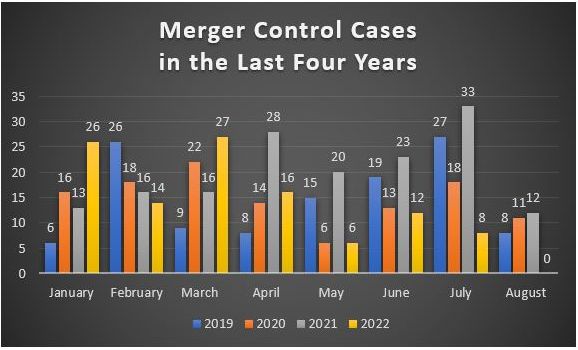 The Board proceeds with re-appointment of its three
members

In August 2022, the Board lost its quorum to hold a meeting
until new members are appointed, as the terms of three of the
current Board members have come to an end.

The Board consists of seven members: five members are required
to hold a meeting, and four members are required to render a final
decision. Accordingly, this situation rendered the Board to a place
of incapability for reaching a quorum to hold a meeting. However,
the Board establishes a quorum once again with the re-appointment
of same 3 members, and all decisions including merger controls,
preliminary and full-fledged investigations, and final decisions
will be pursued as of September 3.

In August, the Board announced that it has initiated an
investigation against Arabam.com, Vava Cars, Araba Sepeti, and
Letgo, all of which operate in the market for the purchase and sale
of second-hand vehicles. The Board will investigate whether there
is an agreement between these undertakings on concerted practices
or that restricts competition.

The Board scrutinises the exclusivity provisions of a betting
site

Another Board investigation announcement relates to the betting
site Nesine.com. According to the announcement, the Board has
concluded its preliminary investigation to determine whether
Nesine.com violates Turkish Competition Law by concluding vertical
agreements including exclusivity provisions. Accordingly, the Board
stated that there is substantial and sufficient evidence to
initiate an investigation against Nesine.com in this regard.

Popular scooter systems are now on the Board’s agenda

The Board also announced that it has initiated an investigation
against micro-mobility services (e.g., electric scooter rentals)
provider Martı. In the announcement, the Board stated that it
has concluded the preliminary investigation to determine whether
Martı holds a dominant position in the relevant market and
abuses this position with its exclusionary activities against its
competitors. The Board has yet to issue its decision.

The Board examined predatory pricing in the retail toy
market

The Board published its reasoned decision on Toypa, which
operates as a retail seller of children’s toys. In its
decision, the Board examined the allegations against Toypa that
claim abuse of dominant position by applying predatory prices
through regional discounts, and did not initiate an
investigation.


In line with this, the Board investigated:


In order to disclose any foreclosure in the relevant market, the
Board examined the activities of Toypa and its competitors in the
market as well.

As a result, the Board noted that Toypa’s competitors
increased their number of stores in the shopping malls where both
Toypa and its competitors operate. Accordingly, the Board concluded
that the de facto situation of the market does not indicate any
market foreclosure, and thus the third criterion stated above
regarding predatory pricing does not exist. Therefore, the Board
decided not to initiate an investigation against Toypa.

Joining a medical practice as an owner – Corporate and Company Law